Well, I’ve used the Slimline Pro Li myself and can attest that it definitely does the job well. I’ve only seen reviews of the Slimline 2, and although it was intended to be an improved version, many people think that the Slimline 2 lacks power in comparison.

Of course, we need to look at both of these models objectively to try and work out which one may be the best for your specific needs. So, let’s take a few minutes to separate the two trimmers and pinpoint the similarities and differences between the two.

If you’re trying to decide between the two, then I implore you to consider going for the Slimline Pro Li over the Slimline 2. The reason? Well, there are a few reasons for this.

One of the best things about the Slimline Pro Li is that you get an awesome battery life. With most trimmers, you might only get an hour of battery life, but with the Pro Li you get at least 2 hours of battery life. If you’re travelling a lot, then you don’t want to have to keep recharging your trimmer all the time. You won’t have to worry about this with the Slimline Li Pro.

In comparison to the older Slimline Models, the Pro Li version cuts much better – you’re less likely to experience irritation in the scalp if you opt for the Pro Li. This is because the quality of the blades used has increased quite a bit, so you’re going to get a better and easier cut. This is also partly because of the battery power that the Pro Li has, which has improved a lot and allows you to shave your hairs easier.

One of the main things that I like particularly about this model is that it’s designed to fit into your hands easier. Whilst it has the power of a larger trimmer, it’s sleek design make it much easier to use than a set of bulky clippers. You can also use them without the cable, which is another bonus as often a long cable can make it much more difficult to get any haircutting done.

Of course, the main reason that I bought this set of liners is that I wanted to shave my own head. If you want to do this, you will need to zero gap them – basically this means to reduce the amount of space between the front and back blade. This allows you to get really close with your shave, something that other clippers don’t offer. Here’s how to zero gap your liners;

Overall, I don’t want to talk too badly about the Slimline Pro 2 model because I have never personally used them. But, if you check out all of the reviews on Amazon, it’s pretty clear to see that there’s a lot of issues that people have had with them; 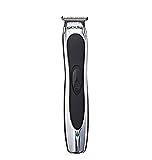 It seems that they’re just not made to the same quality as the older Slimline models, which is a shame. But, you should probably avoid them and stick to older Slimline Pro models if you want to play it safe. If you’re looking for a new set of clippers to shave your head with, then it would definitely be worth considering looking at the Andis line as they’re one of the most competent models around.