You can’t put a price on the health of your skin. That being said, I’m sure you’ve all heard about La Mer. They’re one of the most expensive skincare brands on the planets and are targeted at that prestigious user who is really looking for the best of the best. To the everyday person (like me), their products are ridiculously expensive and you could never fit their products into your budget on a regular basis.

But, I did manage to get my hands on a tub of Creme de La Mer. How? Well, my mother decided to treat herself and after a few uses, she went back to her regular Nivea Creme. “It’s exactly the same thing but 10x the price!”, were her specific words to me. So I thought to myself.. are they? We’ve all heard that Creme de La Mer is amazing and was developed by a scientist.. yada yada and so on and so forth. I just want to know if there’s a dramatic difference that can warrant this huge increase in price!

I decided to have a look at the two, both Creme de la Mer and Nivea creme (which is my go to moisturizer and has been for many years now). So, I think that I can give you a good rundown of the differences between the two, although there isn’t enough for me to justify spending $60 on a moisturizer!

Although they are actually relatively similar, there are a few differences between the two cremes that I’ve found in my testing of the two. These aren’t dramatic differences, but they are definitely something that you should be aware of.

Overall, if you want to give La Mer’s creme a chance and you’ve got money to blow, then why not buy a tub and see if it has an effect after using it for a month or so. For me, I’ll bask happily in my $2 Nivea creme, as I can’t see the need to spend that kind of money on a moisturizer (I’d much rather have a new set of straighteners, thanks!). 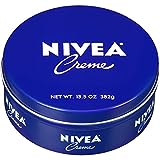