I use a razor on an almost daily basis – at minimum every 3-4 days. I currently shave my head with a Headblade, but I don’t use the same razor for shaving my beard. It just doesn’t work the same on my face as it does on my head!

I go for a completely shaven head, but I do still maintain a pretty substantial beard. For a while, I tried to use the same head razor for my head as I would on my face. But, it just didn’t work well.

I switched out to the Gillette Fusion for a little while – and it worked just fine. But, it didn’t really work as well as I’d liked it to – yeah, I’m pretty picky. I was looking for something more crisp and clean, and this didn’t really do the job.

So from there, I’m going to give you two of the best different types of shavers to use to shape your beard. It really depends on what you want – do you want the sharpest finish, or do you want something that works for convenience?

These are just my suggestions – here are a few other things you’re going to want to consider.

For the very sharpest finish, you’ll undoubtedly want to consider using a straight razor to shape your beard. This will give you the ‘barber’ look that you’re searching for.

I can’t speak for all the straight razors out there, but I found that the Parker Straight Razor worked well (yes, I actually use the products that I review!). I went for the Parker because it had the best reviews and to be honest, it looked pretty darn cool in comparison to some of the others. 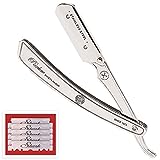 The main area that I want a straight razor for is the sideburns leading into the beard. I hate shaving the definition fade between the beard and your head, which you’ll only understand if you’re a bald guy. I like going from completely bald to completely beard, so I need to shave the beard perfectly, otherwise it looks extremely tatty.

The straight razor was fantastic for that – creating a sharp definition between my beard and my head. It was also relatively easy to use to define the beard and shape it easily, though I’m the first to admit that my beard isn’t the thickest.

I will say that using a straight razor isn’t the best if you’re concerned about cutting your face whilst shaving. To get a sharp finish, you’ll usually need to use a sharp razor – unfortunately, this will often end up in nicks. I was fortunate enough to avoid this, but it was pretty obvious that this may have been a risk whilst I was shaving.

Pros and Cons of a Straight Razor for Your Beard

There are a couple reasons that you might want to use a straight razor to shape your beard over other options. They are;

Now, there are some drawbacks from opting for a straight razor. They are;

My Alternative – A Safety Razor Works Well Too

If you don’t want to use a straight razor, then I’ve found that a safety razor works pretty well too. Granted, it doesn’t give the same close cut that a straight razor does – but nothing will.

If you already use a regular razor for your neck, then it might be worth switching it out for a safety razor and using it from your beard too.

My favorite safety razor is the Merkur Futur. It’s one of the best safety razors on the market right now, and it’s worth considering if you’re looking for the best of the best. If you want a cheaper option, opt for the Weishi.

I’m one of those people who hates to have too much stuff. If I’m travelling or I’m busy, then the last thing that I really want is to be carrying my Skull Shaver, Headblade and a straight razor around with me. Call me lazy – I’ll admit it.

For these short term occasions where I’m away for less than a week, I’ll often just take a safety razor with me and use it everywhere. My head, my neck, for shaping up my beard – a safety razor is a great option for this, and something that you should undoubtedly consider if you’re as lazy as I am.

Plus, the cut that a safety razor gives is much better than what you’d find with a normal razor (in my opinion). I do have friends that prefer a cartridge razor, so it does come down to individual option to some degree.

Pros and Cons of Safety Razor for Your Beard

There are a lot of positives of using a safety razor. They are;

Quick and Easy – Using a safety razor is a quick and easy option for shaving your beard.

Multi Use – You can use the safety razor on other parts of your body, too.

Very Cheap – With a safety razor, they’re so cheap when it comes to refills. You can pick up a lot of spare razors for a super cheap price.

Though, you will find a few drawbacks, too. So of the drawbacks of using a safety razor include;

Not quite as sharp – You’re not going to get as sharp of a cut with a safety razor, that’s just a fact. Though unless you’re super grooming orientated, you’re unlikely to notice a difference.

Some people find them awkward – Personally, I’ve had no troubles using a razor to shave my beard. But, there are those that find the handle awkward and difficult to use. Don’t worry if this is you; it will just take some practice to get used to it.

In conclusion, you can find options for both a straight razor and a safety razor. It’s difficult to find which of these will work best for you without trying it.

If you want the sharpest look, go for a straight razor – but be aware you’ll have to take time to learn to shave without cutting yourself. If you want the easiest way, then a good safety razor will likely be the best option for you.