The Braun 3 series are one of the less popular beard trimmers on the market, though that doesn’t mean that you should overlook them completely. Just because they’re a cheaper brand than most, doesn’t mean you should disregard them completely from your search for a decent trimmer. But, are there any differences between the two models that warranty the price difference, or are they pretty much the same?

Well, whilst both of these two models are similar, there definitely are a few differences between them – the main ones being an extended battery life and far more precision length settings with the BT3040.

However, this doesn’t mean that you need to go straight for the BT3040. If you want a trimmer and you’re on a really tight budget, then it could be worth considering opting for the BT3020 over the BT3040 as typically it comes at a cheaper price. Let’s take a look at the two models to find which one is best.

Of course as the name suggests, both of these models are very similar to each other. But, there are some small differences between them that you’ll want to be aware of. Let’s run through some of the good and bad things about both models.

As I’ve said, the differences between the two are actually quite small and subtle. The main differences are;

What else is good about the BT3040 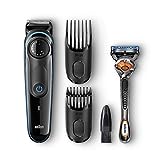 Overall, the BT3040 is definitely a better choice for the majority of people. It’s a better, more well rounded trimmer that will get the job done. Whilst the BT3020 is still an okay trimmer if you’re on a tight budget, it just doesn’t have those added elements that the BT3040 does.

Now don’t get me wrong – there are other brands out there that you may want to consider two. Especially some of the Norelco models, which can hold their own with pretty much any other brand. But, at it’s price range then this one from Braun is up there with the best budget beard trimmers.