Rogaine works. It works so well, that it’s now become almost synonymous with the actual formula minoxidil. But one of the main drawbacks of using Rogaine is the expense. For Rogaine to work, you need to use it every day forever. Well maybe not forever, but for as long as you want to keep your hair.

Over the months and years, the regular cost of Rogaine can become extremely expensive. So, it only makes sense that other brands wanted a piece of the pie. Enter Equate Minoxidil foam. A generic form of minoxidil that you can find in the majority of retailers, it’s become increasingly popular due to it’s lower price tag. But is it as good as Rogaine? And are there any differences between the two?

Minoxidil; it’s one of the most popular hair loss formulas around, and there’s a good reason for that. Why? Well, it’s the only hair loss product that’s actually approved by the FDA. This means that it’s scientifically proven to work!

Minoxidil is undoubtedly one of the two most popular hair loss products on the market, and it has been since the late eighties (although it gained popularity in the 90s). The other being finasteride, more commonly known as Propecia. You can either decide to use these products separately, but for the best results you might want to use them together.

Firstly, let’s have a look at Rogaine itself. Then we can have a closer look at generic minoxidil brands like Equate and see if they are as effective. 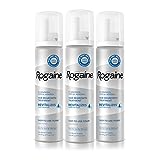 Rogaine – or Regaine if you’re in the UK. It’s been around since the late eighties, with the company seeing massive growth throughout the 90s and becoming a household name. They were the first big brand to use minoxidil for hair loss as opposed to as a tool to lower blood pressure. 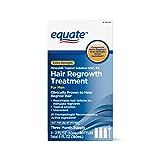 The main reason that people look to use Equate, or any other form of generic minoxidil, is simply the high price of Rogaine. Rogaine can cost between $30-40 per month, with Regaine – Rogaine’s European cousin – sometimes costing double that. So it only makes sense that people look for alternatives that are cheaper. There’s no point paying more for something when essentially, the brands are just the same.

Of all of the other brands of minoxidil excluding Rogaine, then Equate is probably going to be second best. Whilst the ingredients don’t differ too much to the Rogaine ingredients, there are definitely some differences between them.

Overall, the products are generally the same in terms of effectiveness on hair loss. The main differences that you’ll find is with is how they feel on your scalp. In general, the main reason that people opt for Rogaine is that they find that it feels better on their scalp. Whilst this isn’t always the case, opting for Rogaine is a safe bet.