The Norelco 5 series are some of the most popular versions of the Philips brand in general – their range of multigroom shavers have become extremely popular, more so than any other multigroom shaver on the market. The 9 series are not quite as popular, but they were still quite well received on release with many users giving positive reviews.

If you’re going to purchase the 5 series like the 5200, then nowadays your best bet is the updated 5570 or 5750. If you want the 9 series, then actually you’re probably best off going for the Philips Norelco 8900.

These are undoubtedly the best options that Norelco have to offer in this regard. I’ll cover what they have to offer as opposed to the original versions. It’s worth nothing that Norelco update their products fairly regularly, which ends up leaving a lot of Norelco shavers becoming discontinued. So, let’s look at some of the options that are currently available.

The Norelco was released a few years ago, and instantly people seemed to have issues with it. It was popular, but many people found issues with it’s charging – you couldn’t charge the Norelco whilst you was using it, which bothered a lot of people. You can check out the Amazon reviews of the 5200 online to see some of the issues that people had with it.

A Better Alternative – The Norelco 5570

The Norelco 5570 is a better option for those looking for a trimmer that can be used both whilst in the shower, but also works well when dry as well. It can be difficult finding a shaver that works well in the shower and dry too, but the 5570 does exactly that. With it’s Aquatec technology, it makes it easy for this shaver to work in both Wet and Dry conditions.

It has a special turbo mode, which gives the shaver an extra 20% of power on what it is usually shaving with. This is perfect if you have thick, coarse hair as this added boost will undoubtedly help to shave those hairs that are difficult to shave.

One of the better things about foil shavers is that they adapt easily to your neck or face. This means that you don’t need to worry too much about irritation, as you’re unlikely to shave against the grain with a flexible shaver. As it’s a foil shaver too, this also helps to reduce the chance of irritation.

It also has an ear and nose trimmer, which covers pretty much everything that you need from a multigroomer. It’s a great option if you want a multigroom trimmer that works for your entire body.

The Norelco 9800 was also a pretty decent shaver, but it did come with issues and has since been discontinued by Philips. A better option now is to go for the Norelco 8900 instead. 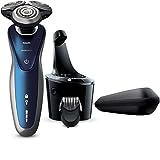 The Norelco 8900 is actually similar to the 5 series of Norelco – it’s probably more similar than any other series that you’re going to find. But, it does excel past the 5 series in a few areas.

Firstly, it used a V Track precision blade system. This ensures that you’re going to get a really close shave, without the high probability of irritation. Unfortunately, this is a possible side effect of using cheaper trimmers, and it’s one of the main reasons that you might want to up your budget.

It’s a true multigroomer and you can use it for a variety of things, but it’s particularly good for the beard. It has what’s called a Smart Click beard styler, which helps you ensure that you can shave your beard easily and accurately.

What I like most about this shaver is that it’s entirely waterproof and extremely easy to wash in the shower. This means that you don’t need to worry about it being difficult to clean, as if you shave your body whilst showered then you can easily clean it out.

Overall, this is one of the very best multigroomers on the market; period. You’re going to struggle to find a shaver that can match this one, but it is rather expensive so you’re going to want to make the most out of it.

Overall, both the 5570 and the 8900 are very good options if you’re looking for a solid multigrooming shaver that you can use for pretty much everything. If you’re fed up of using a ton of different shavers, then it only makes sense to get one shaver that you can use for a variety of different things. This way, you don’t need to worry about carrying a ton of stuff around with you.

There are a ton of other Norelco shavers on the market that you may want to consider, especially if you aren’t keen on the idea of a multigroomer. Here’s some of the best options for alternatives to these models.

All in all, if you want a good multigroomer then it’s worth looking at the 8900 as the optimal shaver for multiple uses. It works as well for your face as it does for your body, which is impressive credentials for a shaver. If you don’t have that budget, then the 5570 also does a great job too.