Philips Norelco are undoubtedly the biggest brand when it comes to beard trimmers; in fact, they’re dominant in all kinds of shaving equipment, not just beard trimmers. The 7000 series of Norelcos have proven to be some of their most popular products, and you’ll want to consider them if you’re in the market for a new beard trimmer.

The reality is that all of the Norelco 7-7300 range are all extremely similar to each other – they are all evoutions of the same model. Currently, the best option to go for out of these models in the Noreclo 7200, as it’s released most recently and is the most readily available shaver.

There are a ton of other beard trimmers out there that are competing for the crown as the best beard trimmer. And though it’s difficult to crown one trimmer in particular, it’s difficult to ignore the Norelco 7200 claim to the throne. Lets have a look at the 7200 and how it’s an update on the other 7k series models from Norelco. 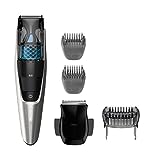 Something that the majority of users like about the 7200 is that the blades are self sharpening. This means that it’s going to last you a long time without a great deal of maintenance – you’ll still have to take care of your shaver, but you won’t have spend a lot of time keeping it in condition.

The 7200 blades are good for those who often deal with skin irritation – the most common issue that people face with shaving. The steel blades are designed specifically so you don’t need to worry about them irritating your skin, even though they’re made with stainless steel.

Another good thing about the 7000 series in general is that they use a zoom wheel as opposed to a ton of different attachments. Though you do have attachments with the 7200, you also have a zoom wheel which has 20 different lengths ranging from 0.5mm to 10mm in length. This means that you can easily cut your sideburns to a different length than your mustache, which is important.

You’ll get 80 minutes of charging time from a full charge with the 7200, which is pretty good. You can also use the 7200 comfortably whilst it’s plugged in, so even if it does run out of battery you don’t need to worry about waiting for it to charge before you can use it.

The 7200 allows you greater control of your beard, and it will enable you to get a neat beard without having to visit your barber. If you want to have a well groomed beard and want to do everything yourself, then the 7200 is one of the best options around.

It’s worth mentioning that the 7200 is now considered as the Norelco 7 series dominant model, so you might see it referred to as just ‘the 7 series’.

The 7200 is also slightly lighter, which might not make much of a difference but it’s a definite improvement. The 7200 is generally considered to be the older brother to the 7300 – the 7300 was released in 2010, whereas the 7300 was first released all the way back in 2010 and has since been discontinued.

The Norelco 7100 is part of the same series as the 7200 and 7300, but it’s generally considered to be a body groomer as opposed to a beard trimmer.

It’s a perfectly good piece of kit that works well as a body groomer, but you wouldn’t want to use it as a beard trimmer as it’s going to be a little rough on your face. When you’re shaving your face, you’ll need something that’s made for your face as typically it is more sensitive than your body.

The Norelco 7100 has a pretty good lifespan of 50 minutes, which might not seem as much if you’re considering it against beard trimmers then it’s not, but generally a body groomer will have to work a little harder than a beard trimmer as your body hair is often more coarse than hair on your face.

There are a lot of different options when considering Norelco shavers, so it’s worth looking around and finding the best one for you.