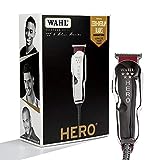 Although there are a lot of differences, there are a ton of similarities between the models too. They are;

Why I prefer the Wahl Detailer

There’s no doubt that these are two of the best clippers from Wahl, but I definitely would always choose the Detailer over the Hero. The main reason for this is that the Detailer is a more regular set of hair clippers, whereas the Hero is more of a specialist smaller set of clippers. Of course, this might be what you’re after, in which case you should opt for the Hero’s.

One of the main things that I love about the Wahl Detailer is their durability. If you cut hair often, then one thing that you want to be sure of is that your clippers are going to last you years – not months. Anyone who’s bought a cheap set of clippers has learned the hard way. The Detailers will undoubtedly last you a long time as they’re super well made and durable.

Even though they’re high quality and well made, this doesn’t make the Detailer’s necessarily expensive. This is another reason I like the Wahl Detailers – affordability. You don’t have to pay a huge premium for the 8991’s or any other Wahl Detailers for that matter.

Overall, these clippers have become solidified as one of, if not my very favorite set of barbers clippers that are available on the current market.

As a result, it’s clear to see that both of these sets of hair clippers have their pros and cons. It really does depend on what exactly it is that you’re looking for from your set of hair clippers – this will help you make a decision between the two.

If you want a small, easy to use trimmer that you can use for behind the ears and harder to get to areas, then you should look at the Wahl Hero. It’s size and weight make it a good choice for a set of clippers that’s easy to manoeuvre around the head.

If you’re looking for something for lineups and to do fades with, then you should opt for the Wahl Detailer as it’s extremely useful for these kind of things, as well as regularly cutting your hair. If I had to choose one from the two, it would undoubtedly be the Detailer as I feel this is more suitable to general haircutting than the Hero, which is better for a specific of hair cutting.